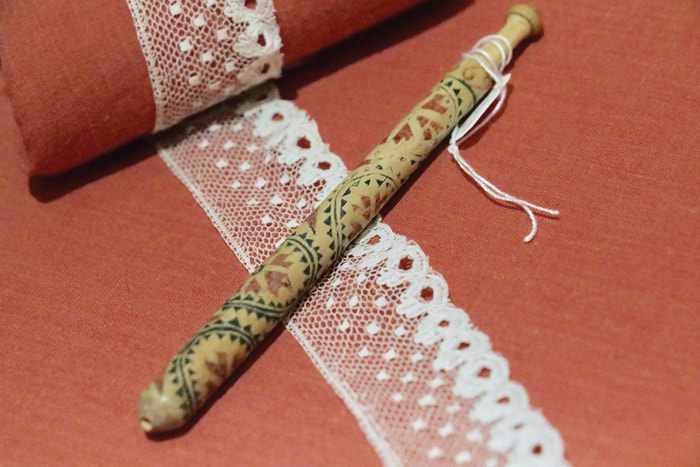 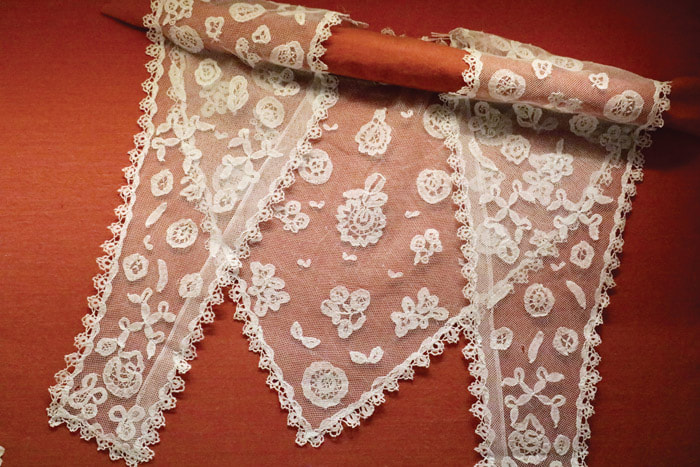 ​Trolly Lace takes its name from the Flemish ‘Trolle Kant’, a kind of ribbon lace worked round and round a pillow, using a heavier thread known as a ‘cordonnet’ or ‘trolly’ to outline the design and fine thread for the net ground. The netting and the design is worked together and the width of the resulting lace, purchased to decorate the edges of collars, cuffs and flounces for at least 400 years, is generally between 1 – 10cms.

Trolly Lace making was not unique to East Devon, but it was a local speciality. A cottage industry employed hundreds if not thousands of homeworkers in our region and we have some very intricate and beautiful examples of their work in the Lace Room.

queeen victoria and the lace from east devon 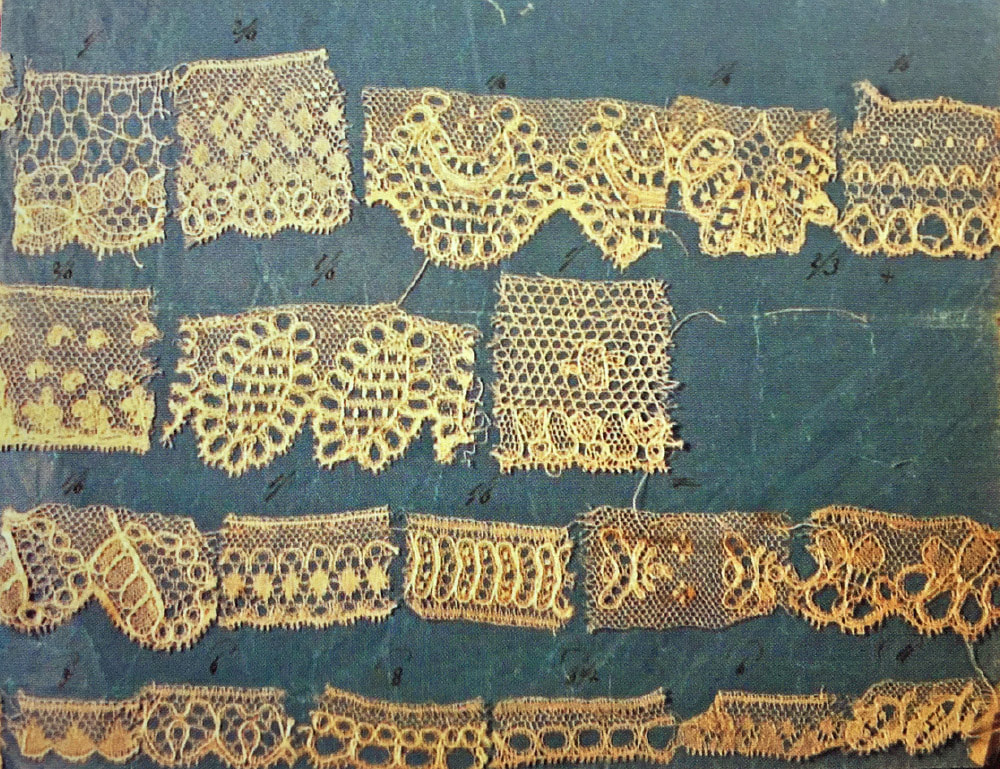 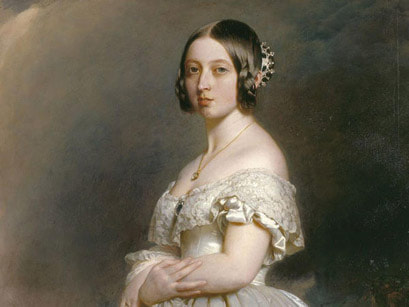 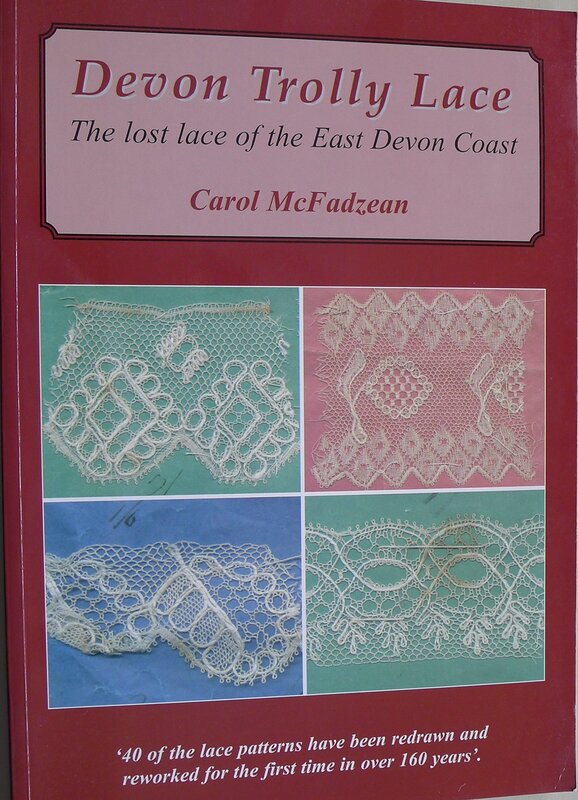 Devon Trolly Lace – the lost lace of the East Devon Coast
Fairlynch played a small part in the preservation of the remarkable find in 2002, of a lace dealer’s bag in the roof at Woodbury Salterton Primary School. The bundle of material included a pale green satin handkerchief edged in tarnished silver lace and decorated with Honiton lace motifs and the message, worked in Honiton Rib Lace, “To her most Gracious Majesty, Queen Victoria, with humble gratitude from the poor lace makers of Woodbury Salterton.” Accompanying it was a sampler covered in intricate Devon Trolly Lace with the message, “To her most Gracious Majesty with the humble hope of further orders.” The rest of the bundle comprised sheets of paper sewn with around 700 priced examples of lace, each of a different pattern.

The lace photograph above comes from the book, Devon Trolly Lace – the lost lace of the East Devon Coast by Carol McFadzean. She is the lace enthusiast who was tasked with unwrapping the Woodbury Salterton samples and who recognized their importance. Back to the Fairlynch connection: inside the bundle, which was contained in a linen envelope, was an old letter from the museum. Evidently the lace had been shown to someone here for an opinion and Mrs Whittaker, a Honiton Lace teacher had reported that the samples were Devon Trolly Lace. The parcel was then returned to the head-teacher for safekeeping, and forgotten for several decades.
The lace makers’ samples must date from the very beginning of Queen Victoria’s reign, because as archivist for the Woodbury Parish History Group Carol had already come across a press cutting from The Times in 1841, reporting that Her Majesty had ordered more lace from the “destitute lace makers of Woodbury Salterton.”

Items from the Woodbury Salterton lace dealer’s bag were on show in an exhibition at Exeter’s RAMM in 2020, until the museum closed because of Covid-19. The exhibition was called ‘By Royal Appointment: Devon Lace Makers’ and also featured several pieces from the Fairlynch collection.

In the portrait above, Queen Victoria wears her wedding dress, which was decorated with East Devon Lace.

Why were the lace makers of East Devon described as ‘destitute” in 1841? Carol McFadzean suggests it was because the labour intensive craft was becoming a victim of the industrial revolution. Inventors had found ways of making lace on machines. In 1843, the Report on the Employment of Children quotes Mr Samuel Evans, a lace dealer of Exmouth complaining that “the nominal value of the hand-made lace had fallen off at least 60 or 70 percent.” He said the amount of money paid to a child for a day’s work was typically 3d (less than 2p) but that often lace-makers exchanged their work for goods in shops and never saw any cash.

In 1865 Mrs Bury Palliser published her ‘History of Lace’, which was reviewed in the English Women’s Domestic Magazine. The reviewer quotes from the book, “a good lace-maker may earn from tenpence to one shilling a day” and comments, “it is not pleasant to reflect that of the large prices given for English lace so small an amount finds its way to the persons engaged in the arduous work of making it and so great a profit to the dealers.” So an early ‘Fairtrade’ sympathy may also have played a part in the decline of Trolly trade. Before long Honiton Lace, in which hand-made motifs were sewn onto machine-made net became more fashionable than Trolly and by the 1860s the Trolly lace industry had all but died out.

At the height of the trade men, women and children worked as lace-makers and the children learnt their skills at lace-schools, where they might also be taught their letters. The 1841 Employment of Children Report mentions Eleanor Rice, aged 48 of Newton Poppleford, who began to make Trolly lace at the age of 5 or 6 in 1798 and Mary Driver, 30 from Beer who learned Trolly at the age of 6 in 1819. After the Education Act of 1870 several local schools included lace-making among their lessons. Otterton Primary School included it in their curriculum until the 1930s.
McFadzean, C. 2004: Devon Trolly Lace: The lost lace of the East Devon Coast. ISBN 0-9547683-0-2